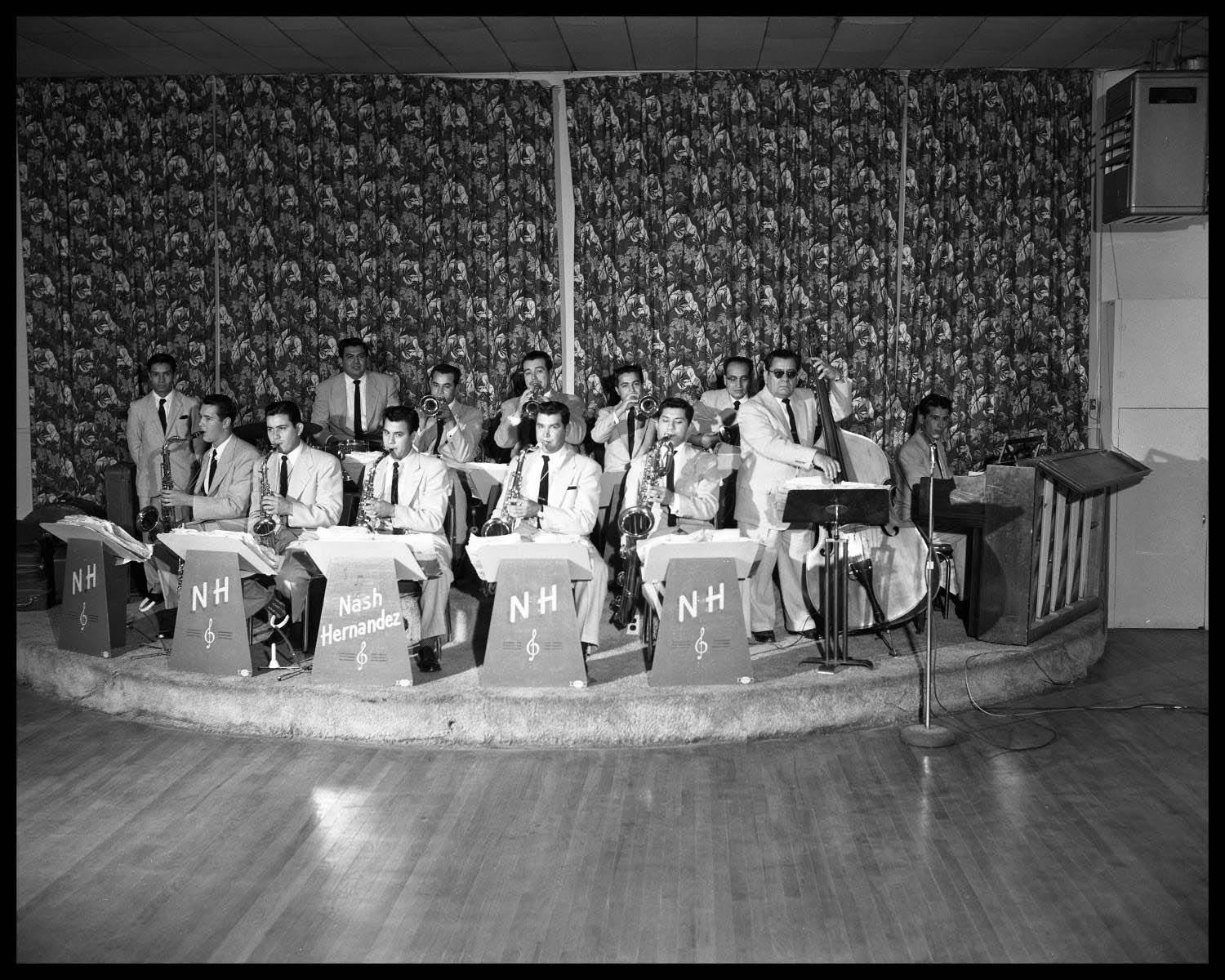 The Nash Hernandez Orchestra: An Interview With Ruben Hernandez

The Nash Hernandez Orchestra was one of the key musical institutions in East Austin during the late 1940s and 1950s. Listen below to an interview with Ruben Hernandez, the original bandleader’s son, about his father’s life and the history of the band. 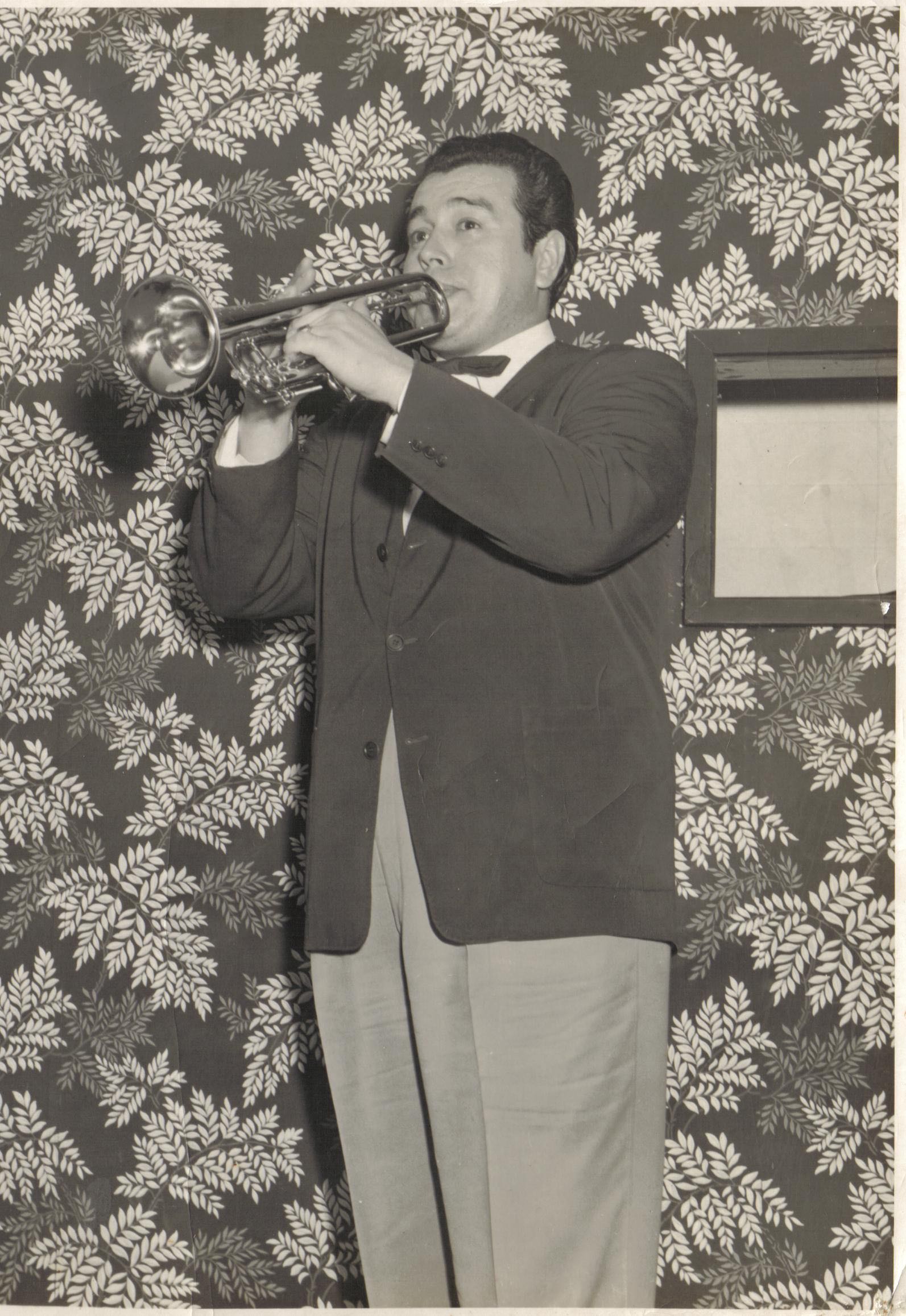 Although superlative adjectives are fraught with fragility, one can confidently claim that the Nash Hernandez orchestra is one of the most storied and significant big bands in Austin music history. Founded when Swing groups were taking a nose dive in popularity across the country, the orchestra has shown remarkable resilience to the shapeshifting taste of Central Texas audiences. Hernandez's example demonstrates that, although Austin's music scene in the 1940s and 1950s was increasingly characterized by small ensemble Country and R&B music, local big bands did not just persevere but adapted and developed. The group is still active and together, more than seventy years later, although live music is at a historic halt during our current Covid-19 conditions (hopefully this will no longer be true when you read this).

First cutting his teeth in German polka bands in his home town of Fredericksburg in the 1930s, Nash Hernandez started playing big band music professionally during World War II at California’s Camp Pendleton. After serving overseas, he moved to Austin in the early-to-mid 1940s and began playing with one of the capital's earliest Latin groups, Matt Velasquez and his Latinaires . He started his own orchestra in 1949.

In its first two decades, the Nash Hernandez orchestra played many important roles: it was a neighborhood orchestra for the Mexican American community in East Austin; it provided the soundtrack for local Civil Rights events; and it was one of the main purveyors of non-Tejano Latin Music in the city.

In the interview below, Nash Hernandez’s son Ruben recounts his father’s life, the history of the orchestra, and his own experiences in the band.

Here are three important contexts for the orchestra during the 1940-1960s:

Following the creation of a new urban plan in 1929, Austin purposefully segregated its black, white, and Mexican American residents. The city used a variety of tools to coerce African Americans and Hispanics into neighborhoods beyond East Avenue (now I-35). By the late 1940s, when Nash Hernandez began organizing his first orchestra, Mexican Americans overwhelming lived in a small enclave in the East, right north of the Colorado river.

Like the Pan-American Center or Zaragosa Park, the Nash Hernandez orchestra was a binding cultural institution for these mid-century Mexican American neighborhoods in East Austin. It was a community band, a compliment to the early local conjunto groups of Camilo Cantú and Johnny Degollado. Although not the only group of musicians from the area by any means, its frequent performances were deeply intertwined in the lives, identities, and celebrations of its neighbors, giving the orchestra an enduring presence in the area surrounding E. 1st Street (now E. Cesar Chavez Street).

Their place at the cultural core of East Austin in the 1950s is evident in their performances at its Cinco de Mayo and Dies y Seis de Septiembre celebrations, two of the most important holidays for Mexican Americans across Texas. Austin’s local festivities were major affairs and typically lasted two or three days. Dancing was part of a larger program that often included the crowning of a beauty queen; a carnival; civic events; the symbolic attendance of the Mexican consul, Texas state governor, and/or Austin mayor; and a string of patriotic speeches and songs. 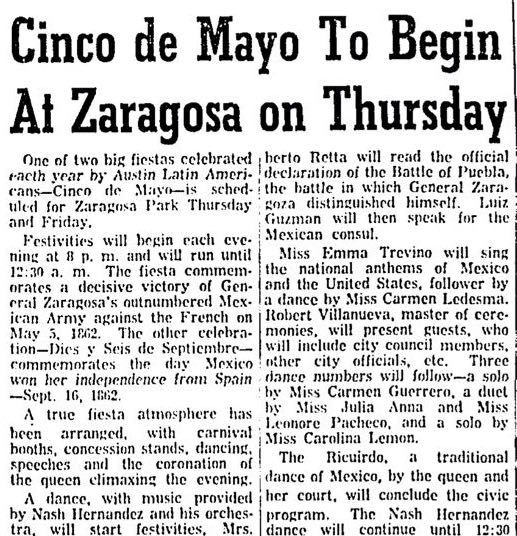 Nash Hernandez also performed constantly for the neighborhood's postwar youth, making them a musical mainstay for Austin’s Hispanic baby-boomers. Throughout the 1950s, they regularly played the “Friday Frolics,” an popular set of monthly teen dances. The “Frolics” typically took place in Zaragosa Park and at the Pan-American Center, two sites that formed the heart of the city's Mexican American public space. But they didn't just play for young neighborhood dancers. They were an integral institution at almost every type of event in this part of East Austin: fundraisers for local causes, school dances in the Metz Elementary auditorium and Zavala High School gym, weddings, PTA meetings, quinceañeras, Valentine’s Day socials, and countless performances at the Pan-American Center for benefits, carnivals, Christmas parties, and acrobatic shows.

During its first decades, the orchestra was also one of the most visible representatives of the Mexican American community for the white dancers in Austin. Their broad repertoire was both a mark of their professionalism and gave them a niche in the local music scene. They played the current radio hits, but they also added dance tunes that were more unique and exotic to Anglo audiences: boleros, rumbas, and cha-chas. This multi-genre style-and their ability to smoothly cross between different parts of segregated Austin-landed them jobs across the city's nightclub landscape. During they 1950s, they performed most frequently for downtown dine-and-dance audiences at the Tower, the Terrace , and Avalon (run by pioneering Spanish language DJ Lalo Campos). 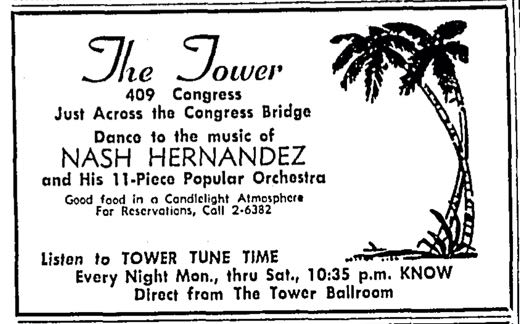 White audiences’ interest in and appreciation of their background had strict limits, however, especially in the bands’ early years. As Ruben Hernandez discusses in his interview, the band still faced racism in these venues and was sometimes forced to perform under the pseudonym “Jim Nash and His 12-Piece Orchestra.” During the early 1950s, the band almost exclusively played for Anglo patrons under this alias. 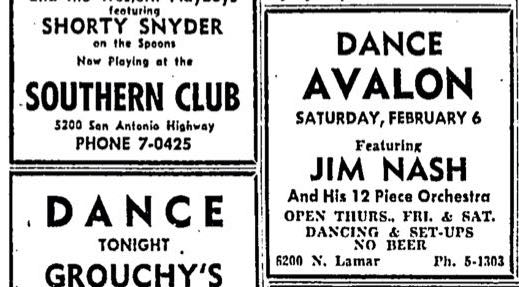 In the later 1950s and early 1960s, the opposite began to occur: gigs for white Austin began to emphasize the orchestra's identity. Now they were brought in to play parties and gigs that had “south of the border” themes, as they did for a state convention in 1957 and shows at the Jade Room in 1963. The Varsity Inn , an older club that presented R&B and rock and roll at the time, hired them for a weekly Friday “Tropical Dance Night” in 1960.1 Beginning in 1963, the orchestra played the Art Fiesta at the Laguna Gloria Museum, a yearly Mexican-themed event for the Austin arts community. 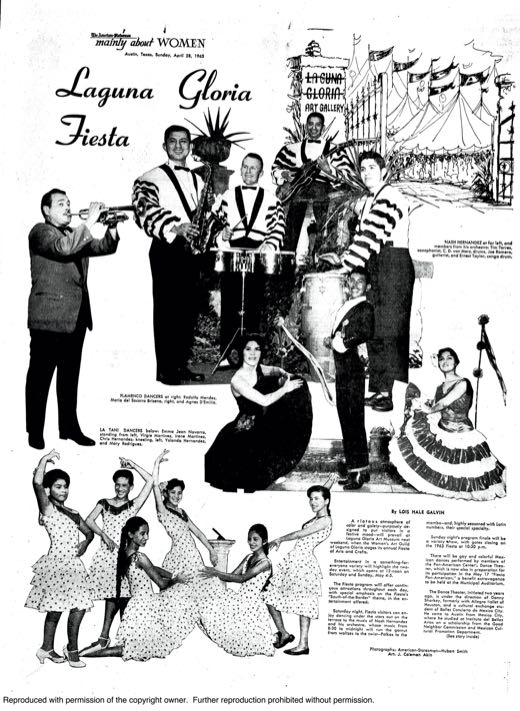 Hernandez’s orchestra had ongoing associations with some of the key postwar Civil Rights organizations in Texas. Although not overtly political himself, as his son Ruben points out, the band was a steady performer for events and benefits for LULAC and the American G.I. Forum. Akin to the NAACP and its role in the Black Freedom Movement, these two activist groups challenged legal and social discrimination against Latinos/as after World War Two.

LULAC (The League of United Latin American Citizens), founded in 1929 in Corpus Christi, was the most prominent civil rights organization to confront the inequalities that existed for Mexican Americans in Texas. Like the NAACP, they used the courts to challenge segregation in public places, including schools, parks, barber shops, and swimming pools. In addition to their legal strategy, LULAC also had a cultural mission: they focused on changing perceptions of Latinos/as. Pushing back on racist characterizations of Hispanics as foreign and alien, they emphasized Hispanic Texans' essential place within American society. They identified Tejanos/as as both “Mexican” and “American.” Mexican Americans, they argued, were a hybrid: they possessed a unique Central American heritage and, at the same time, were part of the U.S.’s mainstream public.2 The American G.I. Forum, founded in Corpus in 1948 by Dr. Hector P. Garcia, focused first on discrimination in military benefits but soon joined LULAC in cases against larger institutions.

The Nash Hernandez orchestra performed for LULAC- and American G.I. Forum-sponsored events during one of the organizations' most active and consequential periods, the decade after World War Two. Hernandez founded the orchestra shortly after one of LULAC’s most significant early legal victories, Delgado vs. Bastrop I.S.D., which ended the segregation of Mexican Americans in schools in Texas. The case was, in fact, local, originating just outside of Austin in the small town of Bastrop. Following this success, LULAC and the G.I. Forum initiated fifteen more lawsuits against school segregation in Texas in 1950. A few years later, in 1954, they won “Hernandez vs. The State of Texas” at the Supreme Court, which forced Texas to accept Mexican Americans on juries. During and after this heady and historic period of civil rights activism, the Nash Hernandez Orchestra was effectively LULAC’s house band in Austin, the center of state politics.

The Nash Hernandez orchestra largely shed their “white” pseudonym, “Jim Nash,” in the aftermath of these powerful legal victories by LULUC and the American G.I. Forum. This refusal to disguise their identity may have been an effect of the successes of the Mexican American Civil Rights movement during this period, a sign of the increasing confidence and public pride in Mexican Americans’ place and status in Texas. Asserting the bands' heritage at mainstream Austin dance venues was a form of cultural work that paralleled LULAC and the American G.I. Forum's activism in the courts.

As a band that played a variety of pop music, from big band swing and rock and roll to rhumbas and Mexican patriotic songs, the Nash Hernandez orchestra was also a musical embodiment of LULAC’s emphasis on the dual identity of Mexican Americans. The group was both an identifiably Latin band and recognizably part of American mainstream music. By playing such a broad repertoire, the orchestra put out those bicultural characteristics in sound, molding it into a wide-ranging horn and percussion driven style. This impulse towards cultural pluralism was, according to the scholar Mario Garcia, deeply characteristic of the generation of Tejanos/as between 1930 and 1960.3

The Hernandez band offered a different side of Latin Music than other Mexican American big bands in the state, however. South and South-Central Texas was the seat of a host of innovative orchestras, like those of Beto Villa and Isidro López, that combined swing, sweet music, and rock n’ roll with Texas-based conjunto and Tejano music. Following the reeds and brass model of other dance orchestras, these orquestas also emphasized the role of the accordion and a repertoire of polkas, rancheras, and schottische. Locally, Manuel Donley and Alfonso Ramos led orquestas that continued and expanded the cutting-edge music pioneered further South.

The Nash Hernandez orchestra, on the other hand, played more national- and internationally-oriented Latin styles. In many ways, the band was closer to the transnational bands of Pérez Prado, Xavier Cugat , and Tito Puente, huge hit makers for Latin Music across than U.S., than Villa or Lopez, who played music that stayed localized in Texas and other parts of the Southwest. Instead of a preponderance of orquesta-beloved polkas or waltzes rancheras, they favored the Caribbean-based rhythms of mambo, rumba, merengue, cha-cha, and boleros.4 They also did not use an accordion, the key instrument in the regional sound of orquesta and conjunto music.

Even so, the Nash Hernandez orchestra and the orquestas were two sides of the same musical coin in this period of Texas music. They were all part of a postwar attempt by Mexican American bands in Texas to mix together Latin-identified music with broader popular American styles. In the late 1940s, Villa, the most famous, combined Glenn Miller-like songs with the sound of the accordeon. About a decade later, Lopez adopted rock and roll in his orquesta. At roughly the same time, Hernandez mixed his sets with pop dance band hits, rock and roll, cha-chas, and rhumbas. Thus, the Hernandez band shared a common impulse with the contemporary Villa and Lopez orquestas, even if they did it with a different repertoire and sound.